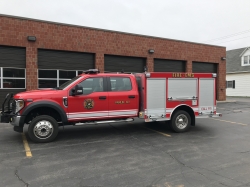 The Hamlin Morton Walker Fire District and Monroe Ambulance responded for a radio alarm from 2c41 for the MVA with injuries on the corner of Drake Road and Roosevelt Highway the afternoon of October 23, 2014.

2c34 Arrived on scene and confirmed a 2 car accident that was blocking part of the intersection and there was approximately 1 gallon of hydraulic fluid on the ground.  Chief Smith declared a Level 0 HazMat and requested the HazMat tech to call is cell phone.  248 arrived shortly after and split the crew with one half performing EMS and the other half securing the scene of any hazards.  2412 arrived and joined the crew of 248 in their operations.

A punctured tank was found to be the cause of the hydraulic fluid leak and was plugged by Lt Doerrer and Lt Thompson.  Crews from 248 and 2412 cleaned up the leak using absorbent pads and speedy dry.  Both vehicles were secured and fluids cleaned up from both.

Monroe Ambulance evaluated both patients with neither of them wanting to be treated or transported at this time. 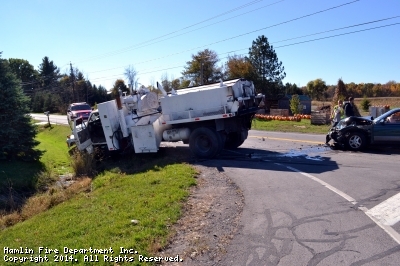 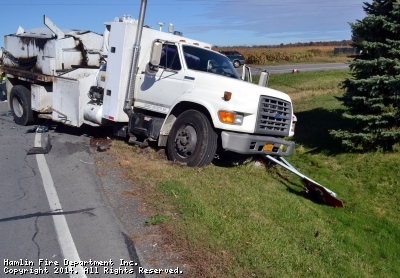 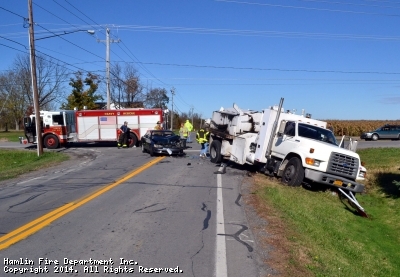 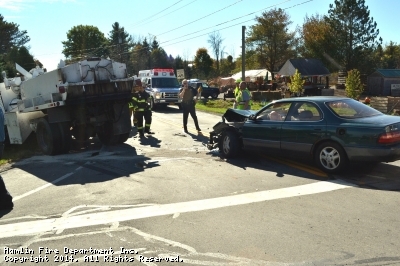 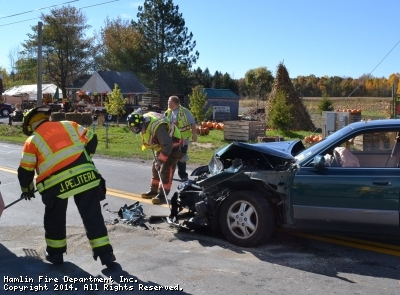 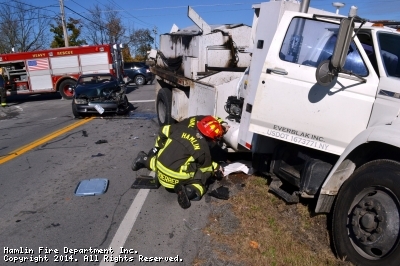 The Hamlin Morton Walker Fire District’s oldest active fire apparatus is the 1973 Jeep CJ-5 that we use to extinguish brush fires. It is housed in Station 1 on Lake Road. The reason this vehicle is still in active service (and could possibly be the oldest active fire truck in Monroe County) is due to the loving care provided by the volunteers who man it. In the 46 years of service it has provided to North West Monroe County, the Jeep has had several renovations and upgrades. The latest of ...

Thank you for your support! We will see you again "The First Saturday in August"  Follow us on Facebook  @ Hamlin Fire Lobster Bake  What a successful event it was, over 155 Lobster Dinners and 40 Steak Dinners were served in under 2-1/2 hours. We will see you next year!!

Mutual Aid to Hilton for the RIC team

At 1400 hours HMW 2413 responded mutual aid to Hilton as the RIC team for a report of a small barn on fire at 1881 Clarkson Parma Town Line Road, 2C-26 on scene reporting a shed fully involved.

2C34 and Rescue 248 responded to a 911 call for a car into a garage with no injuries. The center strut between two overhead doors was pushed out partially dropping both overhead doors and pushing a partial wall through the back of the structure. Once firefighters determined that the electric to the structure had been shut down the incident was turned back over to the owners and code enforcement. Photos and Story: J. Clement

The alarm was for a reported loud noise in the basement with a male (husband) covered with blood at 250 Jacobs Road. A neighboring firefighter, who heard the loud bang, rushed next door and removed the male to the exterior of the structure. While in the basement performing the victim extrication, a secondary explosion occurred. 2C14, 24 & 34 responded along with Squad 2418.The firefighter reported to the Chiefs that there were explosions taking place in the structure and 2C14 requested a Ham...

The Hamlin Morton Walker Fire District was dispatched to automatic mutual aide to the Hilton Fire District for the reported house fire.  2c14, 2c41, 2c44, 2c68 2413 with 2c54 and a total crew of 6 and 2432 with 2c78 responded on the assignment.2c16 arrived on scene and reported heavy smoke from the structure and declared a working fire.  2c16 assumed command and placed 2c46 as operations.2413 arrived on scene and set of for RIC interventions as needed.  2432 arrived and was d...

The Hamlin Morton Walker Fire District was dispatched automatic mutual aide to the Brockport Fire District for the reported basement fire.  Hamlin 2413 responded with Lt Magovero, Lt Thompson and a total crew of 6.  Chief Smith responded to the scene.Hamlin Chief Smith went on location with light smoke showing from the residence.  After investigating Chief Smith reported he had a basement fire and the first in engine would be stretching a line.  Brockport's first engine s...

The Hamlin Morton Walker fire district was dispatched mutual aide to the Brockport Fire District for the Structure Fire.  Hamlin 2412 was initially sent for the fill in to Brockport Station 1.  2412 responded on the fill in with Captain Barker and a crew of 4.  Chief Prince responded to the Brockport fire station. Brockport Chief Smith went on location with light smoke from the structure five minutes after initial dispatch.  Shortly after the interior operation...

The Hamlin Morton Walker Fire District along with Hamlin Ambulance and Monroe Ambulance responded for the 2 car MVA with reported injuries.2c14, 2c34, 248 with 2c104 and a crew of 5 and 2428 with a crew of 2 responded on the assignment.2c34 arrived on location with a 2 car accident partially blocking the road.  Chief Smith reported he had 2 patients that had to be evaluated from the vehicles.  248 arrived shortly after and the Medics of the crew (EMS Lt Thompson and Firefight...

The Hamlin Morton Walker Fire District and Monroe Ambulance responded for a radio alarm from 2c41 for the MVA with injuries on the corner of Drake Road and Roosevelt Highway the afternoon of October 23, 2014.2c34, 2c41, 248 with 2c64 and a crew of 5 and 2412 with 2c74 and a crew of 4 responded on the assignment. 2c34 Arrived on scene and confirmed a 2 car accident that was blocking part of the intersection and there was approximately 1 gallon of hydraulic fluid on the ground.  Chi...

Hamlin Morton Walker Fire, Kendall Fire and Monroe Ambulance responded for the report of an MVA with a vehicle into a tree with people trapped at 9:40 AM on September 21st at 16967 Roosevelt Highway.  2c14 and 2c34 responded with Engine 2425 and Rescue 2428 from Station 2 and Engine 2412 and Rescue 248 from Station 1.2c14 arrived on scene confirming a 1 car MVA with the vehicle into a tree off the road and one occupant trapped.  2428 with a crew of 6 arrived and began vehicle stab...

Hamlin Morton Walker Fire Dist Station one responded for the report of a vehicle fire in front of the Hamlin VFW (1742 Lake Road) on September 27, 2014.2c34, 2c44 and 2413 responded on the assignment.2c34 arrived to find a small fire under the dash board on the drivers side.  Chief Smith used a Dry Chemical extinguisher to put out the fire on his arrival and the crew from 2413 confirmed the fire was out and stood by on scene.  After investigation, the cause was found to be a probl...

Hamlin Morton Walker Fire, Kendall Fire and Monroe Ambulance responded for the report of a MVA with people trapped at approximately 2:00 PM on August 27, 2014 on Roosevelt Highway and Monroe Orleans County Line across from Partyka's Farm Market.  2c34 responded, Rescue 2428 and Engine 2425 responded from Station 2 and Rescue 248 and Engine 2412 responded from Station 1.Kendall 1 arrived on scene and was reporting a two car head on MVA with one person trapped.  2...

April 28 was another busy Sunday afternoon for the Hamlin-Morton-Walker Fire District. At about 1PM station 3 (Morton Fire Department) was requested into Kendall, Orleans County for a reported barn fire on Transit Road. They responded with tanker-engine 2436 which became the base pumper on the “Roosevelt Highway” sector. The Heavy Rescue from Station 1 responded with manpower. Soon after the Kendall Chief requested an engine and a tanker from station 1. Tanker 246 and Engine 2413 res...

Read more »
Hamlin Has Two Level 0 Incidents In One Night

At the request of 2C24 (Deputy Chief Maier) and 2C34 (Assist. Chief Gross), the Hamlin Fire Department was called at 22:00 hours to investigate the presence of a strong odor and a solvent type of material on the roadways within the Harper Mobile Home Park. Engine 243 and Rescue 248 responded on the dispatch.   Further investigation by the Chiefs identified several locations of a thin coat of solvent on the roadway and puddles of materials in different areas along the roadway. 2C24 declared ...

Wednesday, April 22, 2009 At 18:11 Hamlin was toned out for a FAST response to Brockport’s reported barn fire on Monroe-Orleans County Line Road. Engine 243 responded with a crew of 8. Upon arrival command requested 243 set-up a fill site at closest hydrant, several miles back up the road. Lt. Woods split the crew and dropped 5 firefighters as the FAST then took the remaining crew to the hydrant. 243 supplied the tanker relay that consisted of Hamlin’s 246 and tanker-pumpers from Mor...

Copyright © 2006-2021. YourFirstDue Inc. All Rights Reserved. Designated trademarks and brands are the property of their respective owners. Content on this web site is supplied by Hamlin Fire Department Inc.. YourFirstDue Inc. cannot be held responsible or liable for any content, text, pictures, or any other media found on this web site. Maintained by the members and staff of Hamlin Fire Department Inc..
Management Login
Powered by